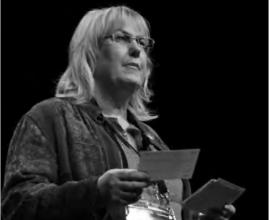 The term intersex describes human beings who have naturally occurring differences of sex anatomy and whose biological sex cannot be classified as clearly male or female. Intersex people are marginalised both in society and in law. Even where their rights are explicitly protected in law, intersex people are often unable to enforce those rights. They suffer from many forms of discrimination in all aspects of life, including their family life. Gina Wilson is the President of Organisation Intersex International (Oll) Australia, a national organisation which promotes the human rights of intersex people in Australia, and provides information, education and peer support.

As President of OII Australia I campaign for the equal right of intersex people to have their human rights recognised and enforced. I am intersex. As is often the case, for quite a while I was not aware that I was intersex. I have congenital adrenal hyperplasia (CAH), and although I knew that this involved having anatomical differences of sex, it was not made immediately clear to me that CAH was connected with being intersex. It was only once the internet became available that I found that CAH is one of the most common underlying diagnosis of an Intersex Person.

Many of the challenges faced by the intersex community are borne out of a lack of understanding and awareness of what it means to be intersex, and the problematic ways in which it has been defined and addressed within the medical field. OII prefers the term “intersex”, a scientific term which was first used in the early 20th century, over other terms which have been used, both historically and more recently. “Hermaphrodite” is scientifically inaccurate as it indicates that a person has fully functioning reproductive organs of both sexes. It also fetishises our sex, encouraging notions that we have two sets of sex organs and can “have sex with ourselves”; “intersexed” implies that something has been “done” to a person; and the recently introduced “disorders of sexual development” is stigmatising and implies that the differences of intersex people constitute an illness or a disease. Use of this kind of language leads society to believe that there is something wrong with being intersex and that it is something that should be altered, or prevented. The term “intersex” does not have these negative connotations; it merely suggests difference, and that we are neither male nor female.

Following a change of government in Australia in 2008, the incoming Prime Minister instituted an Australian Human Rights Consultation. I thought that this might provide an opportunity to start to view intersex through the correct lens, namely that of human rights. I decided, with some friends, to establish OII Australia, with the primary goals of offering support to intersex people and of tackling the lack of rights and protection for intersex people in Australia and around the world, by taking the debate about intersex out of medicine and stigma and into the field of human rights.

In the early days of OII Australia, I spent a lot of time developing a network of supporters. As I started to become involved with political lobbying and human rights activism and to build this network, I found that our strongest allies were LGBT groups and also activists in the area of disability. I believe that this is due to the two most common prejudices that people have about intersex. Firstly, intersex people are discriminated against, marginalised and victimised essentially because of homophobic prejudice. The desire to normalise us, and to do away with ambiguity by “invisibilising” our intersex, was to see us as “normal” males and females. The goal was to see us living heterosexual lives, whereas if we engaged in same-sex relationships, this was seen as a failure of our sex assignment. I came to see that we were often seen as either partly or completely homosexual, and were faced with homophobic prejudice. We therefore had a lot of issues in common with those being advocated by LGBT groups.

Society’s second prejudice is based on a fear of the “monstrous”. Society often sees differences as negative, or even “monstrous”, and wants to erase them if at all possible. This links to some issues faced by people with disabilities, particularly those born with disabilities. In forming alliances with groups working in the area of disability and of LGBT rights, OII was welcomed with open arms. We were able to learn about activism and to speak to law makers and other activists about issues surrounding intersex, as well as bringing these issues to the attention of society as a whole.

OII Australia seeks to educate people about intersex and issues affecting the intersex community. Today, OII Australia is thriving as the Australian affiliate of OII. OII is now the world’s largest intersex organisation, with members representing almost all known intersex variations and affiliates in twenty countries, on six continents. OII have been strong advocates in the fight for marriage equality, especially since an Australian federal court decision bars intersex people from marriage and the currently available non-specified birth certificates and passports are not allowed to be used under current marriage law.

It is often said that most intersex people live as normal males and females, but, in my opinion, if you have an anatomy that defies notions of normality, and which is different to what is expected of a male or a female, then in order to live a so-called normal life, you must go along with a lie.

Same-sex marriage is currently being debated in Australia, as elsewhere. OII Australia has advocated strongly for marriage to be defined as a consensual relationship between two people, and if we succeed then intersex people will qualify for marriage under that definition. If, however, it is framed in terms of the sex binary, so that marriage needs to be between a man and a woman, or a man and a man, or a woman and a woman, then we would be excluded. OII Australia supports the right of same-sex couples to marry, but we are engaged with the broader fight for full marriage equality, so that intersex people, and indeed all consenting adults, have the right to marry.

Intersex people also face discrimination with regard to their opportunity to be parents. Intersex people are more frequently infertile than others, and the regulation of the “non-traditional” routes to parenthood, i.e. those other than traditional biological parenthood, are particularly important for us. For example, my partner brought children into our family from a previous relationship. The government and society do not make it easy to recognise extended families like this. It is almost impossible to live an intersex life and have a family, because it is only possible for intersex people to have a family life if we accept the erasure of our differences. Under our current system of family regulation, these inequalities cannot be easily rectified. However, I strongly believe that we need to move away from the centrality of biological connections to the regulation of what is deemed to be a family relationship. The idea of “shared genes” being critical to defining the nature of a family is increasingly unhelpful, given the many other ways that families are constructed in the modern world, and of course this does not just affect intersex people.

Society needs to have a broader idea of what makes a family, and I would like to see the legal definition of family widened. For example, I have experienced first-hand the damage that can be done by the state’s failure to adequately recognise the relationship between a career and the person they are caring for when there is no blood relationship between the two, only a relationship of love, care and friendship. We need to move away from the obsession with blood ties and create an understanding of family which reflects social reality.

The Future: Towards Human Rights Protection for Intersex People

We have moved intersex rights more in the last four years than they have moved in the last four hundred. OII Australia continues to lobby and advocate for rights for intersex people. To speak of just one recent positive example: OII Australia has been heavily involved in campaigning and advocacy around the proposed Human Rights and Anti-Discrimination Bill 2012 which is currently being reviewed before its introduction into parliament in Australia. Legislators initially did not have a clear understanding of what intersex was, but having given evidence to Senate Committees and spoken with legislators individually we are hopeful that intersex will be a protected attribute under the Bill, with a definition of intersex as an identity different from male or female. The passage of the Bill is currently the gold standard and potentially the most significant advance towards the protection of intersex people in Australia to date. However, there is more to be done both in terms of cultural change and in terms of legal change.

Most discrimination against intersex people is not as a consequence of us identifying as intersex, but on the basis of our physical appearance and difference. It will ultimately be important to get us out of the frame of intersex “identity”. Intersex people have all kinds of identities – the same broad spectrum of identities that the rest of humanity has. Prejudice is not about how we see ourselves, but how others see us – and this is based on a visible physical reality.

There is a lot more to be done to eradicate this prejudice. In terms of the vital legal protections, the Human Rights and Anti-Discrimination Bill 2012 offers an excellent development in Australia. However, the ultimate goal would be for intersex to be included in UN treaties as this would pressure on the rest of the world to follow suit. OII Australia is putting the rights of intersex people on the agenda and is always encouraging others to do the same and to make the call for these rights louder. Once we are seen to be fighting for our rights and are granted rights, people will know that we exist and the community at large will hopefully become more sympathetic to our cause. Although legal change to protect intersex people is vital, it is only the first step in what must be broad and deep social change that accepts diversity of every kind.

This testimony was originally featured in volume ten of the Equal Rights Review which had a special focus on equal rights in family life. Click here to download volume 10 of the Review.