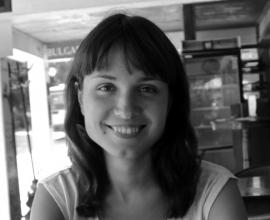 As part of its project in Belarus, the Equal Rights Trust discovered widespread discrimination against political opponents of the Belarusian regime, and in particular that as a result of their political opinions, political and social activists are exposed to disadvantages when participating in employment and education. In January 2014 we spoke with Tatsiana Shaputska whose views are, in one way or the other, not in line with those of the Belarusian regime.

I am 23 years old. I was born and have lived all my life in Minsk. I initially started thinking about the political situation in my country following the political demonstrations and “Squares” (camps in one of the main city squares in Minsk) which were connected to elections in Belarus in 2006. At the time, I was 16 years old and my parents did not allow me to participate in those events. A year later, I participated in demonstrations and at the same time I joined the Young Front and remained a member until 2011.

The Young Front is a Christian democratic organisation with conservative views and as with most political opposition organisations, it has the major aim of establishing democracy through democratic elections. This is usually done through street protests around the time of the election. In particular, the Young Front protested against the Belarusian government’s manipulation of the electoral process by compelling certain citizens to vote in the pre-election term period.

The general situation in Belarus is that your political views influence all aspects of your lifestyle. There are many ways of supporting the current powers. For example, teachers are automatically expected to support the regime. Many teachers are members of the electoral commission and it is usual practice for teachers to be such members because the counting of election votes occurs in schools.

My personal experience of discrimination on grounds of my political views was when I was a law student at a university in Belarus. In mid-November 2009, as a representative of the Young Front organisation, I was invited to the civil society forum of the [European Union] Eastern Partnership in Brussels. My attendance at the forum meant that I was absent from classes for three days. At the time, there was a rule that students may not leave the country’s borders during the school term unless they had special written permission from the administration. However, this rule was nominal and rarely enforced.

After my return, on 3 December 2009, I was summoned to the dean’s office and was presented with an order of dismissal signed by the rector of my university. I was shocked. I had a good attendance, had participated in scientific conferences and the public life of the faculty, and had a high grade point average of 8.5 points. By contrast, other students who had committed a similar infraction by crossing the borders, sometimes for far longer, and who had worse performances in their studies than me, continue to study in the university.

In my view, the way I have been treated by the faculty is an exception to the usual approach. Even the dean of the faculty proposed in a memo to limit the punishment. The copy of the dismissal order stated that the dismissal was based on two things: first, on my failure to explain my absence from classes upon being confronted with the dismissal order that had shocked me; and, secondly, on two memos, the contents of which have not been explained to me. The European Commission intervened in my defence to oppose the dismissal but I was not surprised that I got expelled anyway.

I think that my expulsion was motivated by my political beliefs. As I was the press secretary of the Young Front, my participation in the Eastern Partnership forum was widely covered in the media and the Belarusian authorities were aware that the forum did not invite pro-government and public organisations. The formal reason for my absence was my participation in the forum, and a three day absence for such an event was justifiable – I did not think it was disrespectful. In reality, people violate this unenforced rule all the time – it would be difficult to find a person who did not go abroad at some point during term time – and many people have been absent for much longer periods than me without sanction. It would be ridiculous to enforce the rule fully because then people would not be able to go anywhere at all. In my case, the administration used this requirement as the basis for my expulsion. There was no further investigation into whether the requirement applies only during the school term time and not holidays and the rule is drafted in such a way that you cannot understand whether you have to receive permission or not.

I appealed against the decision of the Ministry of Education to the court of the Moscow district. In court, I pointed to the discriminatory nature of my charges. However, the court rejected the petition. In court, my lawyer requested to make a comparison of my case to similar cases of others where students in university went abroad without permission to prove that I was not guilty, or, alternatively, at least the fact that nobody follows this requirement. The judge declined this request. At the trial, I was blamed along with some other students. But among those other students, the days missed were as many as 70 days! The court’s final decision was made on the formal grounds of the violation of internal rules.

Most of my friends are members of the Young Front or are like-minded people. They suffer because of their political views in many ways – some of them are arrested, others have received administrative fines. Our political views affect all of our lives in some way here. In terms of the future of Belarus, all we can do is hope for the best. I believe that the time will come for change, and it is important for now that there are enough people.