Surviving a Nigerian Asylum for Persons with Disabilities

People with psycho-social and learning disabilities are among the least visible victims of discrimination. They suffer, often systematically, violations of a broad range of human rights. In July 2008, our researches visited Nigeria to study discriminatory law enforcement practices that led to deaths in custody. Among the custodial facilities that the team was interested in were asylums, established within prisons, where people with psycho-social and learning disabilities are placed – without proper judicial review or effective legal representation. During the visit our researches were introduced to 39-year-old Uchenna Emenike, an eloquent survivor of the Enugu Prison Asylum. Here he describes his experiences. 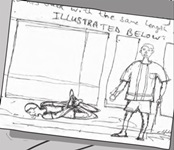 I was 18 years old when I started experiencing mental health problems. Initially, I was treated in a private hospital where I was subjected to electroconvulsive therapy. Subsequently I left school as I needed time to recuperate and was permanently on psychotropic medication.

In 1990, I enrolled in a polytechnic but could not keep up. I was always sleepy because of my medication and for the next 10 years I worked in various manual labour jobs until 2000, when I managed to persuade my father to let me sit for the Enugu State University of Science and Technology entrance exam.

In July 2003, before I could go back to the university, I had an accident at the family home. After a kerosene burner tipped over while I was preparing breakfast, I was accused that I had tried to burn down the house deliberately.

I was taken to the Nkwo Nike Magistrate Court in Enugu. I was very confused and upset as I had not had my medication. The hearing was very brief. The magistrate did not ask me any questions. It was my father who did all the talking, complaining that I had been violent and wanted to burn down the house. I had no lawyer representing me. The magistrate decided that I should be sent to the asylum for observation for two months. But in fact, it seems to me that I was actually sent to the asylum for punishment, as I was never subjected to any psychiatric assessment and my case was never reviewed by the magistrate.

I ended up spending three years, 10 months and some weeks and days in the asylum until I was released in June 2007.

Life in the asylum

The conditions were terrible. Those sent to the asylum are usually labelled either “civil lunatic” or “criminal lunatic”, even if nothing is wrong with their senses. Only three or four men that I came into contact with while I was in the asylum were there because they had been accused of committing a murder or another serious crime. The rest were there simply because of a break-down in the family relations.

In fact, people are sent to the asylum to die. Ventilation, nutrition, water supply and sanitation are poor or broken down. The entire asylum consisted of four cells, each measuring about 25 square meters. There were around 40 men in each cell. Cell number 1 was for those considered as “getting better”; cell number 3 was for those newly admitted and cells number 2 and 4 were for "hopeless cases". I was held in cell number 3, following admission, for 13 months.

The day I arrived, the cell was full of “new breeds” and I was “stocked”. This cell is equipped with a chain attached to the floor. The chain is used to restrain men deemed “difficult” or as punishment. The chain is fixed with a lock around a detainee’s ankle, a method we referred to as “stocked”. Some inmates were known to have been put in chains for many months at a stretch – even up to six months or above – eating, sleeping, defecating, bathing or resting in one spot while in chains.

Nylon binding was also used by wardens for restraint. I was bound so tightly that my body was numb as if paralysed. My arms were tied behind the back and then tied to both legs. The patient is then lifted like a sack and dumped in a corner or left on the spot where he was tied. As the minutes or hours progress, both the pain and the on-setting paralysis is very excruciating. No human being alive will be able to withhold any information or refuse to submit when this is done to him. When the wardens or provost feel the inmate might die or lose consciousness if he is not loosened, he will then be loosened and left alone or maybe have cold water poured over his head. I was tied three times in 2004.

The death of some of my fellow inmates and the sufferings and deprivations I experienced at the asylum affected me profoundly creating a sense of emptiness and worthlessness about the whole concept of life itself. Knowing that I would never see the deceased inmate again in this life, memories of times shared together, of love and hate, haunted the soul.

Many mentally ill individuals here seem to perceive themselves less worthy than the mentally sound. They see themselves as second class citizens. Having lived in isolation from those of sound mind and health for quite some time, they feel inferior.

To be honest with myself, with you and any person who might be interested to know: asylum experience, at least for me, was not only sorrow and pain.

Having been incarcerated for a few years, I can say: for those of us that did their time with faith, I noticed a secret kind of small and incomplete spiritual joy within my soul. In the midst of all the captivity and deprivation in the physical world, this secret foundation of an inexplicable job or sweetness was always welling up within the soul. Especially when or after one had spent time praying or singing songs of praise to God.
Tags:
Victims of discrimination