An Interview with an LGBT Activist: Why We Shouldn't Lose Hope 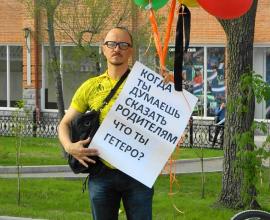 As part of our focus in Russia the Equal Rights Trust works with the Russian LGBT Network - an organisation which provides legal and psychological support to lesbian gay bisexual and transgender (LGBT) persons. From 2014 - 2015 the Network supported Alexander Yermoshkin, an LGTB activist who now lives in New York. In his interview below he describes how his experience led him to leave Russia.

What made you decide to leave Russia?

I decided that it was no longer safe for me to stay in Russia. For a long time, the Russian authorities – either officially or not – made an effort to isolate me in a number of ways. It initially began in 2013 when I was prevented from giving a lecture on geography which would have been open to professors and students - two days before the event the organisers said they had been contacted by "some people" and they advised me to find somewhere else to lecture. Later, I was fired from the school where I worked. Then, the authorities visited my next employer, the Institute for Water and Environmental Problems with Far East Branch of Russian Academy of Sciences, and the management were advised that I should be fired.

You are not the only LGBT activist in Russia - why do you think they targeted you?

I think that they picked me because of the region where I lived. True, there’s a lot of LGBT activists in Russia, but in the Far East I was a “top provocateur”. I really have no idea how they choose their targets, but I was not going to become a trophy for them. I have been under surveillance for a long time - not just as an LGBT activist, I also took part in one-man demonstrations during the election campaign, and I was going to run for a position in the City and Regional Parliaments, but the party's regional office did not approve my candidacy.

Russia Channel recently ran a pseudo-documentary “Special Reporter. Toxic Export”, which was followed by a deluge of publications about you. Could you tell us what actually happened?

My departure from Russia had been planned well in advance and I did not expect any problems, but I was deceived and asked to come to Moscow. I was in Komsomolsk when I received a phone call from a woman, who refused to give her name and said that they wanted to meet me. I had no idea who she referred to by “they”. The woman promised full confidentiality and named an employee with the US Embassy in Moscow. The name sounded familiar, but I didn’t know who that was. I was on the bus and it was very noisy, but the woman was very insistent. I thought that she might be a journalist and wanted to take an interview. She mentioned another employee with the US Embassy, with whom I spoke earlier, and I thought that she was referring to a meeting, at which we would speak about current events in the life of LGBT community in the Far East. The woman emphasised “my interest” in this meeting and made several hints, making me believe that I might be in danger. What was bugging me was the fact that she knew that I had a US visa. I became suspicious and I decided to end the phone call. I said that I had to go and couldn’t talk anymore. Honestly, I was pretty scared.

She called me again in an hour and apologised, saying that she didn't wish to scare me. She said that she checked and found out that my visa was already approved. This time she said that I needed to attend the meeting, as otherwise I might not be able to leave the country. I decided to meet her and they sent me a ticket to Moscow on June 28.

I got a phone call right after the plane landed in Moscow and was told an address, where we would meet. When I got lost and tried to call back, nobody would pick the phone. Finally, they called me back and I found the place, where I had two meetings and during the first one we spoke about nothing in particular – from weather to politics. I was perplexed that they had no accent and by the fact that were flattering me and telling me that I would have a great life in the US. They were telling me that I deserved a better life, was right to leave the country and that they would help me in any possible way. They would make hints that showed they knew a lot about where I was staying at a particular time and my personal life. One of the hints particularly scared me, the woman in the meeting said she knew who had given me my ring. I realised they were not who they claimed to be, and that they had their own agenda. I was scared and didn’t know what was going on. They continued to hint that they had influence and knew a lot about me. I eventually understood that this was a well-organised operation, but at the time I was scared and could not think rationally.

Several times, I started panicking, but they would see that and try to calm me down. Then the first meeting ended. I was completely devastated. Despite the fact that they implored me to keep these conversations confidential, I told my brother and friends about them. The next day I was called again and asked to come to the second meeting. This meeting was recorded and used in the documentary. I was scared, but decided to go to the meeting nonetheless – I thought that if they didn’t get what they wanted, they would prevent me from leaving the country. My main objective was to leave the country and I wasn’t sure if they could do that. I was not thinking rationally at the time.

After the second meeting I decided to go into hiding – I went offline, switched off my phone and went to a place in the Moscow Region. Then I decided to contact human rights activists through the LGBT Network, and, at least, have a consultation. So, I went to the Moscow Helsinki Group, where I met with two representatives. During our conversation they told me that the show “Special Reporter. Toxic Export” was released.

I felt exploited. This show is something similar to “Occupy Paedophilia" but on the state-wide scale, broadcast across the country…

What do you expect from life in the USA?

Now I just want to feel that I am safe and don’t have to be scared anymore. I might not speak English and don’t have any money, but I believe that I will get some support – from my friends, from people who I either know or don’t know, as people have already helped me through this tough situation. I will just try to live my life.

What changes would need to happen for you to return to Russia?

What’s strange is that those who made the documentary asked me this. This is what I told them: the country must turnaround, change its regime and have a focus on universal human rights values. I don’t know when and how these changes will occur, but this is the only way we can move forward. We inherited the Soviet leadership and now we have virtually returned to the paradigm of the Soviet times.

What would you like to say to other LGBT activists who are still in Russia?

I wish that strong and confident activists would pay more attention to people that might face provocation like I did. But generally speaking, we are very different – we have different conditions, resources, environment, social status. I am not sure that there is a solution that would suit everybody. Most importantly, we shouldn’t lose hope and continue helping each other. I am not going to lose hope and I believe that I will be able to return to Russia at some point.

This article is based on the original interview featured by the LGTB Network.