Today, the Equal Rights Trust in partnership with Mizan for Law publish Shouting Through the Walls: Discriminatory Torture and Ill-Treatment, Case Studies from Jordan, a report which seeks to fill a vital gap in the under-explored relationship between discrimination and torture and ill-treatment and exposes shocking findings on the treatment of two marginalised groups in Jordan. 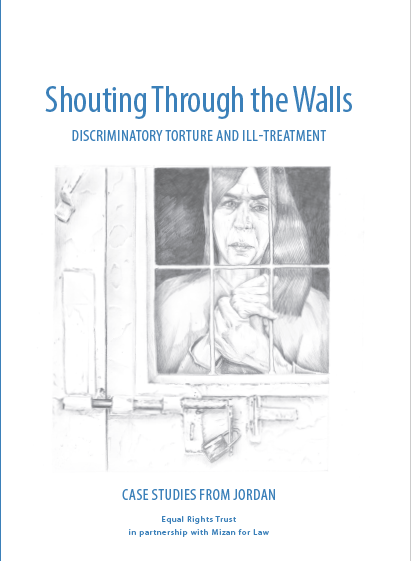 “Firstly, it exposes the severity of discriminatory torture and ill-treatment faced by two vulnerable groups in Jordan. Secondly, it calls for greater recognition on a global level of the often-central role which discrimination plays in the existence of torture and ill-treatment. Importantly, as the report notes, a distinct response to addressing the phenomenon is essential.”

Research for Shouting Through the Walls was carried out between 2015 and 2016. Testimony was gathered from those directly affected, family members, civil society and professionals working with them. These first-hand experiences include serious allegations.

In its first case study, concerning persons with mental disabilities in institutions, the report finds that discriminatory torture and ill-treatment has included involuntary detention, physical and sexual abuse and the discriminatory use of sedation. In one case, a parent of a child with a mental disability told the Trust of how their child had been beaten around the head in an institution, sustaining permanent injuries.

The report also documents the experience of other parents, who outline how doctors failed to inform them of their child’s diagnosis or to explain the effect of their treatment on them. Other notable human rights violations include forced psychiatric interventions and sterilisation.

In its second case study, exploring the practice of detaining women in “protective custody” to protect them from gender-based violence, the report notes that this practice is itself a form of ill-treatment and in some circumstances may be torture.

In some instances, women have been detained for up to 10 years and only released with the support of a male relative or husband, an extremely dangerous practice in domestic violence cases. Indeed, the report cites instances of women being killed upon release by male relatives, despite guarantees of their safety. A bleak picture is also painted of the conditions found in detention, including overcrowding, a lack of access to healthcare, poor hygiene and few opportunities for work.

Shouting Through the Walls opens the door to addressing discriminatory torture and ill-treatment in Jordan, and to combat it, a number of recommendations are made to civil society and the Jordanian authorities.

Among other things, the report calls on the government of Jordan to end the institutionalisation of persons with mental disabilities and the practice of “protective custody” and to implement legislation to ensure equal treatment for persons with disabilities and to prevent gender-based violence. Finally, it calls on the international community and others to recognise the existence of discriminatory torture and ill-treatment and to ensure that the means used to address it fully acknowledge the discrimination at play.

For further details, including interview with the Trust and Mizan for Law, please contact charlotte.broyd@equalrightstrust.org / +44 (0)7732819400.