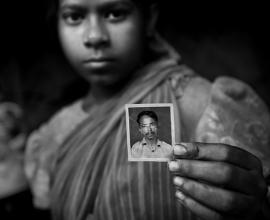 Each year, World Refugee Day commemorates the strength, courage and perseverance of millions of refugees. On World Refugee Day this year the Equal Rights Trust stands in solidarity with thousands of Rohingya refugees who have fled and who continue to flee discrimination and violence in Rakhine State, Myanmar. Today we make an urgent call to the government of Myanmar to address the root causes of this cycle of flight, and for governments of other countries in the region to fulfil their duties to protect the Rohingya and all other refugees within their borders.

Between October 2016 and April 2017, a reported 90,000 Rohingya fled their homeland in Myanmar to Bangladesh and other states, rapidly adding to the hundreds of thousands of Rohingya who have fled before them to escape ongoing discrimination and persecution in Myanmar. Since October, testimonies from these refugees have cited atrocities including infanticide, rape and the mass destruction of property.

Speaking with the award-win­ning photographer and partner of the Trust, Saiful Huq Omi, Abdur Rahim, a Rohingya refugee originally from Chotogazobil village of Rakhine, depicted the scenes he witnessed shortly before he fled:

“Some people had been shot and some killed with machetes. Some had burnt bodies, in some you could see their burnt bones and in others you could see half their skulls. The smell was so bad that nobody could get close to them. I knew some of those who had suffered and I went from one neighbourhood to another, collecting the remains of the dead bodies. I buried them all.”

Our Call to the Government of Myanmar

The governing National League for Democracy in Myanmar has vehemently denied that ethnic cleansing is taking place in Rakhine, despite strong evidence to the contrary. The government has refused a UN investigation into the situation and has restricted access for humanitarian aid and the media. Today, we call on the government of Myanmar to immediately rectify its inadequate response to this situation, to intervene to end violence and relieve suffering and to investigate those responsible.

We also demand that the government looks beyond the immediate crisis, to address the ongoing and systematic discrimination which, for decades, has resulted in the suffering of the Rohingya. Specifically, we call on the government to immediately reform its 1982 Citizenship Law which has the effect of rendering the Rohingya stateless and which results in discrimination in the enjoyment of fundamental rights including education, health and freedom of movement.  The discrimination and persecution which they face in Myanmar is the root cause of the Rohingya's flight from Myanmar.

Our Call to Other Governments in the Region

Whilst we call on the government of Myanmar to address the discriminatory policies and actions which are the root causes of the Rohingya’s flight from the country, this should not absolve other countries in the region of their responsibilities. The Rohingya who flee Myanmar to Bangladesh, Malaysia and Thailand and others are met with a harsh reality on their arrival. Here, they continue to be burdened by their statelessness. Gaps in the national legal frameworks of these countries permit and perpetuate the denial or limitation of rights.

In light of the mass influx of refugees to these countries, there has never been a more urgent time for gaps in their national legal frameworks to be addressed. In the Equal Rights Trust’s publication, Confined Spaces: Legal Protections for Rohingya in Bangladesh, Malaysia and Thailand, national experts provide a detailed explanation on the shortcomings of the frameworks and present a series of recommendations for reform.

Our Call to the International Community

For decades the story of the Rohingya has been one that is often only told following the eruption of a devastating event. The recent violence in Rakhine State is yet another example of this. Thus, our final call is to the international community to look beyond the immediate crises and support action to address the root causes of the Rohingya's cycle of flight.

We call for increased pressure on Myanmar to immediately end violence and investigate those responsible, and for Myanmar and other countries in the region to be held fully to account and to address gaps in their legal frameworks which cause ongoing discrimination. Only by addressing these gaps will the Rohingya be able to live on an equal basis with others in Myanmar and the other countries where they reside.

Find out more on our work protecting the rights of the Rohingya.