A new report published today by the Equal Rights Trust exposes the extent of discrimination and inequality experienced by groups including women; persons with disabilities; lesbian, gay and bisexual persons; and persons living with HIV in Solomon Islands. Stand Up and Fight: Addressing Discrimination and Inequality in Solomon Islands also concludes that a tendency for people to identify strongly as members of kinship groups or residents of a particular island, rather than as Solomon Islanders has promoted difference and fostered ethnic tension.

The report argues that if Solomon Islands is to move on from the conflict which afflicted the country between 1998 and 2003, its people must stand up and fight traditions which exacerbate difference on the basis of ethnicity, gender, disability and sexual orientation. 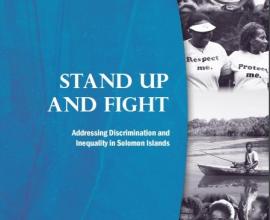 In particular, the report highlights widespread discrimination against women which is directly connected to gender stereotypes portraying women as inferior to men.

“We found that women are effectively second-class citizens in Solomon Islands; they are invisible in all areas of politics and government and do not participate equally with men in any area of life. Violence against women is alarmingly widespread and widely accepted by both men and women. When in 2012 I asked a group of 16 women in Honiara to say if they had experienced partner violence, they all said yes, without exception,” said Executive Director of the Trust, Dr Dimitrina Petrova.

The report investigates patterns of ethnic discrimination, finding that in a country which presents itself as “homogenous”, there are serious concerns about discrimination between those of different wantok (the Pijin for “one talk”, a community group based on shared linguistic and cultural heritage).

Dr Petrova continued, “Our research found compelling evidence of concern amongst Solomon Islanders that those in positions of power abuse their authority and make corrupt decisions in favour of their wantok group.”

In addition to discrimination against women and discrimination on the basis of ethnicity, the report finds that: persons with disabilities are perceived as “cursed” and denied equality of participation in education, employment, healthcare and other services; lesbian, gay and bisexual persons are subject to severe social stigma and are largely invisible in society as a result; and persons living with HIV lack access to services, including health services, as a result of fear fuelled by prejudice and ignorance of the disease.

Yet Stand Up and Fight, which is published in partnership with the Secretariat of the Pacific Community (SPC) – Solomon Islands Country Office and the SPC Regional Rights Resource Team, is launched at a time of great opportunity for Solomon Islands. The country is entering its thirteenth year of constitutional reform and consultation of a draft constitution to replace its existing one is currently underway. The report outlines how Solomon Islands should reform its Constitution to increase protection for the rights to equality and non-discrimination. It calls on all those affected by discrimination to use the reform process to stand up and fight for equality for all. It also makes a number of other recommendations including the repeal of discriminatory laws and the enactment of comprehensive anti-discrimination legislation.

The report is published on the eve of the United Nations Universal Periodic Review of Solomon Islands on Monday 25 January - a process which seeks to address threats posed to the protection of human rights in the given country. The Equal Rights Trust has written to states participating in the Review urging them to make recommendations based on the report’s conclusions and recommendations.