On 20 and 21 December, the Equal Rights Trust launched three new comprehensive reports examining discrimination and inequality in Kazakhstan, Kyrgyzstan and Uzbekistan. Published as these three countries mark the 25th year of their independence, the reports provide unprecedented insights into discrimination on the basis of religion, ethnicity, political opinion, gender, sexual orientation, disability and other grounds in states where little has previously been reported on such issues. 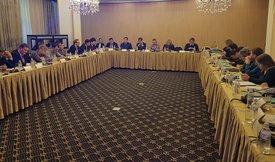 As Kazakhstan, Kyrgyzstan and Uzbekistan mark the 25th anniversary of their independence, these reports expose the reality of discrimination in these countries. We find that – for all the many differences between them – issues of religion and ethnicity are shared concerns. In all three countries, the state imposes restrictive registration requirements for religious groups, discriminating against religious minorities. There are common challenges with the integration of ethnic minorities originating from Russia or their neighbouring states; in Kyrgyzstan and Kazakhstan, for example, we find that language policies indirectly discriminate against ethnic minorities.

We conclude that all three states must do more, repealing discriminatory laws and adopting comprehensive anti-discrimination legislation, if they are to address these and other patterns of discrimination. If our discussions in Bishkek and Astana are indicative, these reports will be an essential tool for engaging authorities on the need for such legal reforms on equality.

In addition to highlighting common patterns of ethnic and religious discrimination, these reports expose country-specific patterns of discrimination affecting women, political dissidents, persons with disabilities, lesbian, gay, bisexual and transgender persons, and people living with HIV.  Using a combination of first hand testimony, literature review and statistical analysis, the reports provide a unique insight into experiences of discrimination in the state in question:

The reports conclude that if these three states are to fulfil the promises of unity, harmony and democracy made by political leaders at the point of their independence, more must be done. The reports make wide-ranging, evidence-based recommendations to the countries’ governments, calling for the amendment or repeal of discriminatory laws, the adoption of comprehensive anti-discrimination legislation and the improved enforcement of existing non-discrimination provisions.