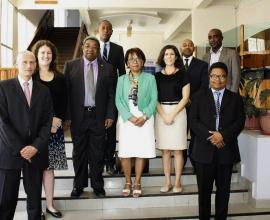 Equal Rights Trust, the Global Campaign and the Assembly President

Over the last two days Madagascar has taken significant steps towards eradicating gender discrimination in its nationality law and eliminating statelessness. If a reformed law is implemented it would ensure, amongst other things, that women are no longer discriminated against in their ability to confer nationality on their children – a change that would benefit many families across the country.

Commitments to reform were made during a session of Madagascar’s National Assembly where organisations including the Equal Rights Trust, UNHCR, the Global Campaign for Equal Nationality Rights and Focus Development Association advocated on the necessity of reform.

Jean Max Rakotomamonjy, President of the National Assembly met with the Equal Rights Trust and its partners and committed to have a proposition de loi (a draft law which emanates from one of the MPs rather than the government) put before the National Assembly for consideration before the end of the current session in December. This​ commitment was on the condition that MPs will receive technical assistance from the partners when preparing the draft.

Twenty MPs also signed a Statement of Commitment which recognises the shortcomings of the current law in protecting human rights and pledges to push reform forward within the Assembly.

“We are delighted with the outcome of the session and we welcome the commitments of the Assembly. Removing gender discrimination from the law would be a major step towards ensuring gender equality and eradicating statelessness in Madagascar,” said Executive Director of the Equal Rights Trust, Dimitrina Petrova.

Madagascar is one of 27 countries around the world which continues to deny women the ability to confer citizenship on their children on an equal basis with men.  Last month, the Equal Rights Trust published a report which highlighted the devastating impacts on the children of women affected by Madagascar’s nationality law. The report outlined that once stateless, those affected are unable to access essential human rights such as education, healthcare and jobs, and without identification documents they are at risk of being arrested and unable to travel freely.  Further, mothers of children often suffer from depression and feel a sense of guilt and shame for their situation.

A core group of MPs have committed to champion the law reform and will now prepare a draft law with the assistance of the Equal Rights Trust and its partners. If the proposition de loi is passed by the Assembly, this would be only the second time the Assembly has used its power to bypass the ministries in a law reform process and would represent a strong message that the Assembly takes its commitment to the human rights of all people in Madagascar seriously.