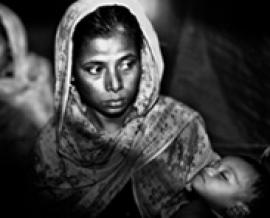 Celebrations are underway in Myanmar as Aung San Suu Kyi and her National League for Democracy (NLD) are emerging victorious in a national election that is being described as a “dawn of a new era”. But the political leaders, including the so called icon of Burmese democracy, have colluded in the disenfranchisement of the Rohingya minority, by failing to condemn the wave of persecution and discrimination culminating in the deletion of hundreds of thousands of Rohingya from the voting register.

“This election can’t be described as either free or fair, because racial discrimination – the prohibition of which is a peremptory norm of international law – was at its heart. Hundreds of thousands of Muslim Rohingya were deprived of the vote. What kind of democratic society can be built on the exclusion of an entire ethno-religious minority? Not one that the Equal Rights Trust could ever welcome,” said the Trust's Executive Director Dimitrina Petrova.

She continued, “Ms Suu Kyi has been urged, at least since 2012, to condemn anti-Rohingya discrimination. But it is clear by now that she has chosen populist power over human rights.”

For years Rohingya have experienced extreme discrimination and persecution in Myanmar, augmented by the 1982 Citizenship Law which has been interpreted as a way of depriving them of their citizenship. They have been openly discriminated against in all areas of life, and subjected to a cascade of human rights violations, including restrictions to marriage and freedom of movement. Their position has been steadily deteriorating over the last three years; while Rohingya have voted in all previous elections since independence in 1948, for the first time, as the population took to the polling stations on Sunday, one million Rohingya were not allowed to cast a ballot.

In the run up to the elections, in what has been surmised as giving into pressure from the ultranationalist Buddhist movement in order to win votes, Ms Suu Kyi and the NDL did little to take a stand for Rohingya. When recently asked about atrocities committed against Rohingya, Ms Suu Kyi replied that it was important to “not exaggerate the problems".

As a result of the violations they face in Myanmar, many Rohingya risk their lives and take a perilous journey to neighbouring Bangladesh and from there, to other countries. If nothing is done to protect Rohingya in Myanmar they will continue to risk their lives to escape the country.

For further information on the plight of Rohingya download the Equal Rights Trust reports: