The Equal Rights Trust is deeply saddened by the sudden death of our former trustee Asma Jahangir, yesterday. Asma made an enormous contribution to the advancement and protection of human rights at the international level and her loss will have a profound impact. Importantly, Asma consistently championed the most marginalised and made them the focus of her immense efforts for change. Her work as UN Special Rapporteur for Freedom of Religion and Belief leaves a particularly valuable legacy for religious minorities around the world.

However, it is for her pioneering work for the rights of the disadvantaged in Pakistan for which she will be most widely remembered. Asma made an incalculable contribution to the pursuit of equality in Pakistan, particularly the rights of women. She bravely represented the most marginalised, such as religious minorities, even when doing so came at great personal risk and sacrifice. 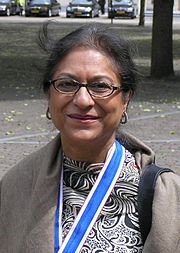 “Asma’s loss is a tragedy both for the equal rights movement as a whole and, at a personal level, for all of those who had the privilege of working with and learning from her. Just last week, Asma and I were making plans in respect of the Trust’s legal   support to victims of discrimination. As always, despite being so busy, Asma was very generous with her time and advice. She was also incredibly warm and supportive. It was an honour to work with her.”

Among her many achievements, Asma co-founded the Human Rights Commission of Pakistan, the Equal Rights Trust’s partner in Pakistan. The Commission continues to work tirelessly for equal rights in the country. Our thoughts are with our colleagues and friends at this devastating time.