On Friday 14 August the Equal Rights Trust launched In the Crosscurrents: Addressing Discrimination and Inequality in Ukraine. The report is the first time an in-depth analysis on discrimination felt by various groups across Ukraine has ever been undertaken, and it assesses how the recent conflict has exacerbated situations for these groups. 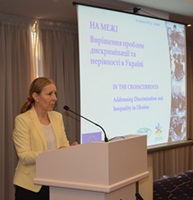 “This report is published at a time of profound change in Ukraine. The country is caught in the crosscurrents created by opposing economic and political forces fighting for its future, and the main line dividing people today is not ethnic, religious, linguistic or regional, but overwhelmingly political,” said Executive Director of the Equal Rights Trust, Dimitrina Petrova.

She continued, “If the government wants to secure the country’s choice in favour of a European type of polity, it should guarantee equal rights for all, regardless of a person’s ethnic, linguistic, religious or sexual identities.”

Some of the report’s most important findings include that:

The +440 page report, researched in partnership with LGBT rights organisation Nash Mir, combines testimony from victims of discrimination with statistics and contextual information. It concludes by presenting a series of recommendations to ensure equal rights for all in Ukraine.

“We tried to identify the most important and most characteristic patterns of discrimination in Ukraine by showing them in historical, legislative and public perspectives in order to both understand the causes of these problems and outline possible solutions,” said Coordinator of Nash Mir, Andrii Kravchuk.

He concluded, “Ukraine is now at the beginning of the emergency reforms which will allow us to approach the current standards of the European Union and the Western society in general. We hope that this report’s recommendations will help to modernise the Ukrainian society and state.”