Today, the Equal Rights Trust and Moldovan non-governmental organisation Promo-LEX launch From Words to Deeds: Addressing Discrimination and Inequality in Moldova the first comprehensive study ever produced on discrimination in Moldova. The report finds that while Moldova has made significant strides in improving legislation on discrimination in recent years, much remains to be done to ensure that these laws are effective in practice. 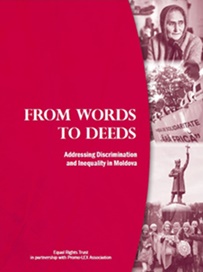 “There is a popular rallying cry in Moldova – “we want deeds not words”. This is the main message which emerges from our research” said Jim Fitzgerald, Head of Advocacy at the Equal Rights Trust.

He continued, “On paper, Moldova has a legal and policy framework which provides a starting point for combating discrimination and promoting equality. Its words offer promise. Yet our research identifies countless gaps between the “words” of Moldova’s most recent legislation and the “deeds” of both state and private actors.”

The report examines patterns of discrimination arising on the basis of race and ethnicity, sexual orientation, gender identity, health status, gender, disability, religion, age and language. It finds that the state has failed to reform a range of discriminatory laws, and that state actors discriminate. It presents evidence of widespread failure to enforce laws prohibiting discriminatory violence – including in particular against women – and those which prohibit discrimination in employment, education and other areas.

It also finds that:

From Words to Deeds also examines the legal and policy framework on equality and non-discrimination, finding much to praise. However, the report identifies significant problems in respect of enforcement and implementation, in particular with regards to the enforceability of decisions by the recently-established Council on the Prevention and Elimination of Discrimination and Ensuring Equality.

The report concludes by making specific recommendations for reforms to law, policy and practice, with a particular focus on improving the implementation and enforcement of the Law on Ensuring Equality.

The report is the product of more than two years of research. It includes the findings of interviews conducted with hundreds of people, throughout the country, together with information and data from research by government, non-government and international actors.