The the Equal Rights Trust and 135 other organisations have pledged to fight plans announced by the Government today that it intends to replace the UK’s Human Rights Act with a weaker “British Bill of Rights”. 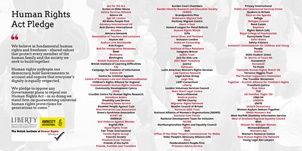 The Human Rights Act enshrines fundamental freedoms into UK law and allows the British public to challenge abuse, neglect or mistreatment, and so the pledge reaffirms that human right are universal, indivisible and inalienable – not a privilege to be given and rationed by any government.

Plans to replace the Act were announced in the Queen’s speech today, and while the full details of the Bill’s content have yet to emerge, all Government plans published to date suggest the “British Bill of Rights” would diminish rights protections for everyone in the UK and some groups in particular, threatening the very concept of the universality of human rights, and allowing politicians to choose which and whose matter most.

The range of signatories opposed to the Government’s plans in itself emphasises the importance of the Act in protecting the rights of all and particularly those vulnerable to discrimination. Signatories include charities supporting children, older people and people with disabilities as well as national groups representing teachers, football supporters and students.

We believe in fundamental human rights and freedoms – shared values that protect every member of the human family and the society we seek to build together.

We pledge to oppose any Government plans to repeal our Human Rights Act – in so doing we stand firm on guaranteeing universal human rights protections for generations to come.