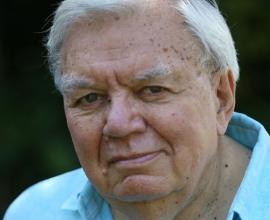 Ian Vogler/Daily Mirror
Professor Sir Bob Hepple QC, the Honorary President of the Equal Rights Trust, died on 21 August, at the age of 81. From 2007 to 2014, Bob served as the Chair of the Trust, and became our Honorary President in July 2014. We are deeply indebted to him for everything we have achieved as an organisation. We at the Equal Rights Trust stand united in its determination to continue his legacy by advancing equal rights worldwide.

Born and raised in South Africa, Bob became known for his active role and influence on the anti-apartheid movement. He practised as an advocate at the Johannesburg Bar and acted as legal advisor to Nelson Mandela in 1962. In 1963 Bob was arrested and co-accused, in the historical Rivonia Trial, with leaders of the African National Congress, and after a 90-day detention he managed to escape to England.

From his arrival in the UK in 1963 until well into his retirement, Bob’s work has been an inspiration to the equality and human rights community. Between 1963-2008 he held professorships at the University of Kent, University College London and Cambridge University. During this time he also became Chairman of Industrial Tribunals, Master of Clare College in Cambridge, and a Judge and Senior Vice-President of the UN Administrative Tribunal in 2007. He chaired the European Roma Rights Centre from 2002 to 2008 and the Nuffield Council on Bioethics from 2003 to 2007. He became a Fellow of the British Academy in 2003, and was knighted in 2004.

Bob's work was critical in shaping the Sex Discrimination Act (1975) and the Race Relations Act (1976), as well as subsequent British equality legislation including the Equality Act 2010. His most recent book, Equality: a New Legal Framework (2011, second edition 2014) is not only an appraisal of the current legislation, but a reflection on the past, present and future of equality law.

Just over a month ago, on 16 July, we presented our inaugural Bob Hepple Equality Award – established in Bob’s name to honour his commitment to non-discrimination and to recognise persons or organisations that have made remarkable contributions to advancing equality.

It was only a couple of days after the award ceremony when Bob learned that he had pancreatic cancer. He died peacefully in his home in Cambridge last Friday. The Equal Rights Trust community is sending heartfelt condolences to his wife Mary Coussey and the rest of his family. We are very proud to have known and worked with such a man. We will remember Bob as an inspiration, a giant in the field of equality law, and a leader with a rare humanity and kindness.