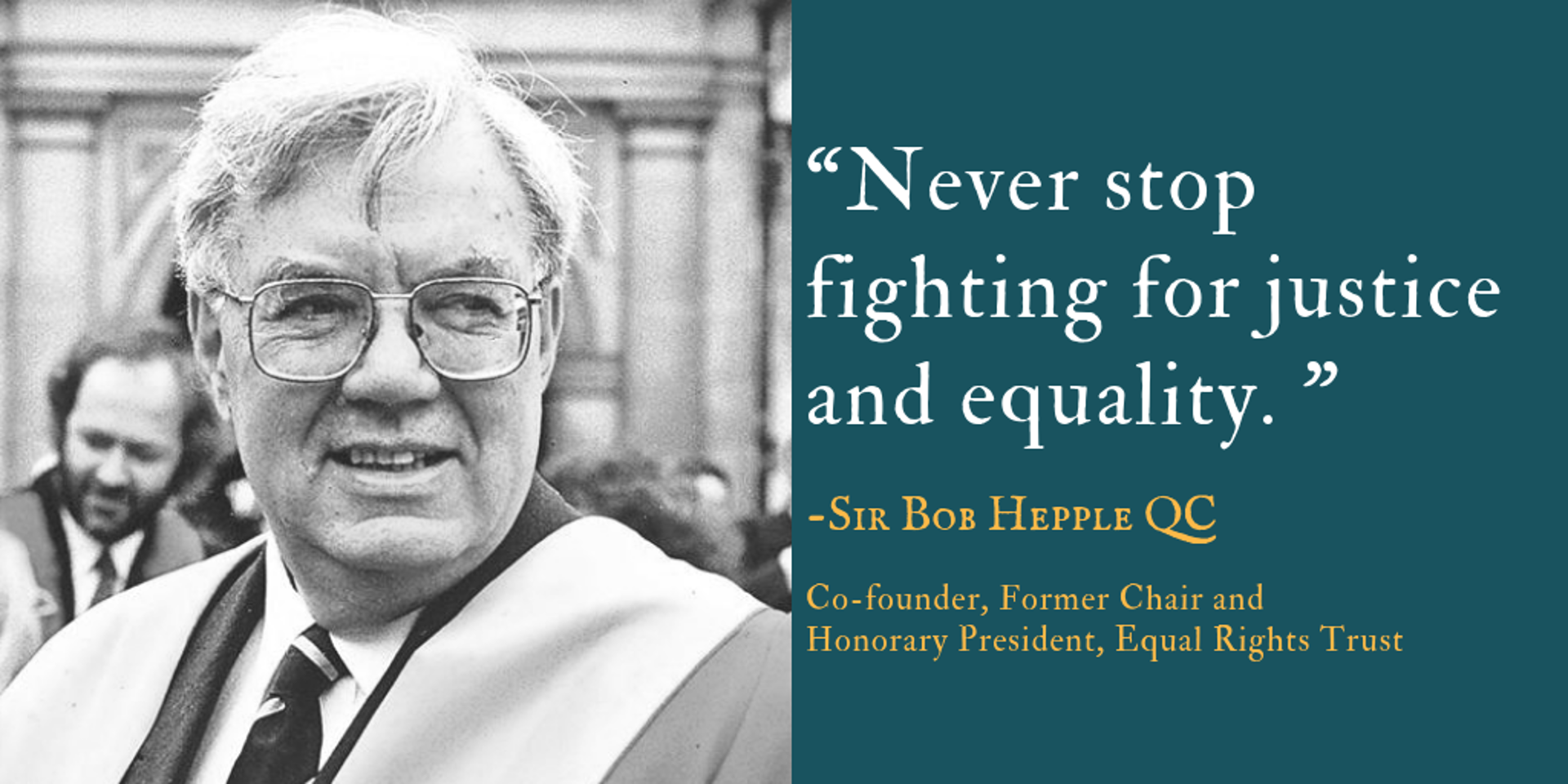 Established by the Equal Rights Trust in memory of the late Professor Sir Bob Hepple QC, champion of equality and non-discrimination, and Chair and then Honorary President of the Trust. The award celebrates those who have dedicated themselves to advancing equality, in particular recognising the achievements of those who promote the comprehensive approach to equality which Bob Hepple promoted, and which drives our work at the Trust. We seek to honour those whose work has not yet received the widespread recognition we feel it deserves.

Please click on the names below to learn more about our previous winners. 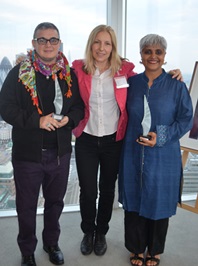 On accepting the award, Pragna Patel said: “This award will help to renew our commitment to waging simultaneously, multiple, and overlapping struggles against inequality, hatred and violence and to safeguard the very ideals of social justice, equality and the rule of law, ideals that give human rights their true meaning and universality.”
For over 30 years Southall Black Sisters has led a number of campaigns which have seen the group advance black and Asian feminism in the UK. These campaigns have included supporting abused women who kill in self-defence, changing immigration rules which trapped non-British citizens in forced marriages, and withdrawing advice given by the Law Society to solicitors on the practice of gender discriminatory sharia law.
Likewise, Mauro Cabral has played an invaluable role in promoting equality over the last 20 years for a different community - that of trans and intersex persons.
Cabral was crucial in the process leading to the enactment of Argentina’s Gender Identity Law in 2012, a law which has been extensively cited in court decisions on gender identity cases, including the Indian Supreme Court, and which has inspired legislation reform in countries including Malta, the Netherlands and Sweden.
Last year, after its campaign in collaboration with other organisations, Global Action for Trans Equality helped reform part of the International Classification of Diseases by the World Health Organization which had classified trans and intersex conditions as illnesses.
“As many other intersex activists I started my involvement with the movement because of experiences that until recent times were defined as simply ‘medical’. After more than 20 years we have expropriated that definition, and are putting those normalizing procedures that mutilated our lives where they belong: on a horrific list of human rights violations,” said Cabral. 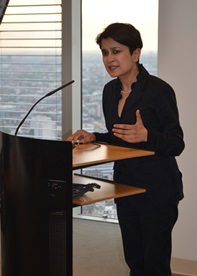 Both winners also reflected on the struggle ahead and the need to remain grounded, stating that these victories are marginal for what can be achieved in their respective communities.
This message was also emphasised in speeches given by Shami Chakrabarti, Director of Liberty, and Dimitrina Petrova, Executive Director of the Equal Rights Trust, who spoke on the challenges faced by human rights defenders in insecure environments around the world and current threats to human rights in the UK.
Dimitrina Petrova concluded: “The human rights and equality movements are under attack in many countries today and need to adjust their strategies in order to protect those most in danger. Although there are daunting obstacles, there are solutions. And we must reward small steps and partial victories, as these can lead to great change.”
2016 Winner - Professor Anna Lawson

Professor Lawson is the Director of Leeds University’s Centre for Disability Studies, which focuses on collaborative, multi-disciplinary research, and Co-ordinator of the University’s Disability Law Hub, one of the largest groups of disability law scholars in the world. Professor Lawson works with disability activists across the world and in recent years has worked with the European Commission, the Academic Network of European Disability Experts and the European Union Agency for Fundamental Rights. 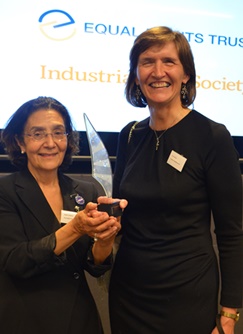 Accepting the award, Professor Lawson spoke movingly about her own experience of disability discrimination and her work to promote equal law reform on disability. Reflecting on the recent referendum in favour of the United Kingdom (UK) leaving the European Union (EU), she said:

"For those working in the equality field, the coming months and years are likely to be busy ones in which vigilance will be needed close to home as well as further afield.

I have had the great privilege of working with some of the faceless bureaucrats in Brussels, of whom we have heard so much about over recent weeks. I’ve witnessed first-hand their total tireless and selfless commitment to tackling inequality and exclusion.

I do hope we will be able to guard against the assumption which surfaced in the lead up to the referendum that the UK has dealt with equality issues so we have nothing to gain from collaboration. Not only does this limit our potential to learn and develop, but it also suggests that our concern with equality and justice is only for people within our borders."

The EU has been a key driver of improved equality legislation in the UK. As the Equal Rights Trust has highlighted, the first statutory prohibitions of discrimination on grounds of sexual orientation, religion or belief, and age in the UK were introduced in order to comply with the EU Employment Equality Directive. In respect of disability, the fact that the EU has subsumed the UN Convention on the Rights of Persons with Disabilities into many of instruments and policies has influenced the development of inclusive laws and policies in the UK.

Following the award presentation, Justice Kate O’Regan, who in 1994 became the youngest judge and one of only two women appointed to South Africa’s Constitutional Court, gave a keynote speech on, “Looking at labour law through the lens of a constitution”. Speaking about the evolution of labour law in South Africa during and after the apartheid era, Justice O’Regan also stressed the importance of global collaboration in the development of laws:

"Never expect your system to stay the same. Things can change dramatically and we learn so much from looking at others."

Paying tribute to Sir Bob Hepple, Professor Lawson poignantly ended her acceptance speech repeating words he spoke shortly before his death in 2015: “Whatever happens, we must never stop working for justice and equality.”

If you were unable to join us at the event but would like to watch the video recording, please click here.

Mamikon Hovsepyan, Executive Director of PINK Armenia was the winner of the 2017 Bob Hepple Equality Award. Despite facing considerable challenges, Mr Hovsepyan has fought tirelessly to combat discrimination against LGBT individuals in Armenia. In addition, he has advocated a holistic approach to non-discrimination, working to challenge violence against women, and collaborating with other members of the Non-Discrimination and Equality Coalition to promote the adoption of comprehensive anti-discrimination legislation in Armenia. With this award the Trust hopes to encourage those – like Mr Hovsepyan – who promote improved protection from all forms of discrimination, both in Armenia and elsewhere. 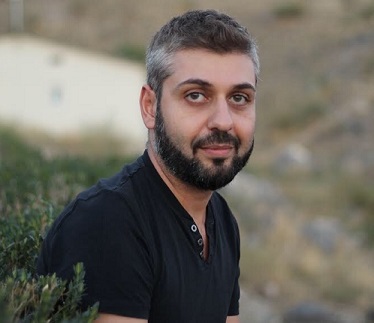 In response to news of the award, Mr Hovsepyan said:

I am so touched that my work with PINK Armenia has been noticed. It makes us stronger and prouder of the work we do and we share this with our community, our supporters and allies. It encourages me in my fight as an activist to continue empowering others to join the frontline and make the world a better place for everyone."

Since it was founded, PINK Armenia has been the subject of numerous threats and intimidation; in 2015, 37 NGOs detailed such instances in a joint letter to the President of Armenia and on two occasions safety concerns resulted in PINK Armenia relocating offices. When these challenges have arisen, PINK Armenia has stood tall, it has continued to uphold an ambitious and innovative mandate and its multifaceted approach has remained inclusive of advocacy, litigation, awareness raising, training and support services.

Highlights of PINK Armenia’s Work Include:

Impact on Media Reporting: To address negative and limited media coverage of LGBT issues, PINK Armenia helps to form alliances between the media and LGBT individuals, promoting a glossary of appropriate terms to use in LGBT reporting and Mr Hovespan has taken a courageous approach in confronting negative media. Since it began this work, PINK Armenia has identified an increase in positive media reporting and in the number of people using digital tools to speak out in support of LGBT individuals.

Call to the Government of Armenia:  PINK Armenia participates in dialogue with the Government and makes recommendations on, among other things, its draft laws and its Human Rights Action Plan. In 2015, as part of the UN Human Rights Council’s Universal Periodic Review of Armenia, it called for the inclusion of sexual orientation and gender identity as a recognised ground of discrimination in Armenia’s draft anti-discrimination law.

Creation of New Innovations: PINK Armenia recently launched the training website “Inqnus”, a first of its kind platform enabling people in Armenia and the Caucuses to participate safely and anonymously in training on sexuality, sexual health, human rights and discrimination 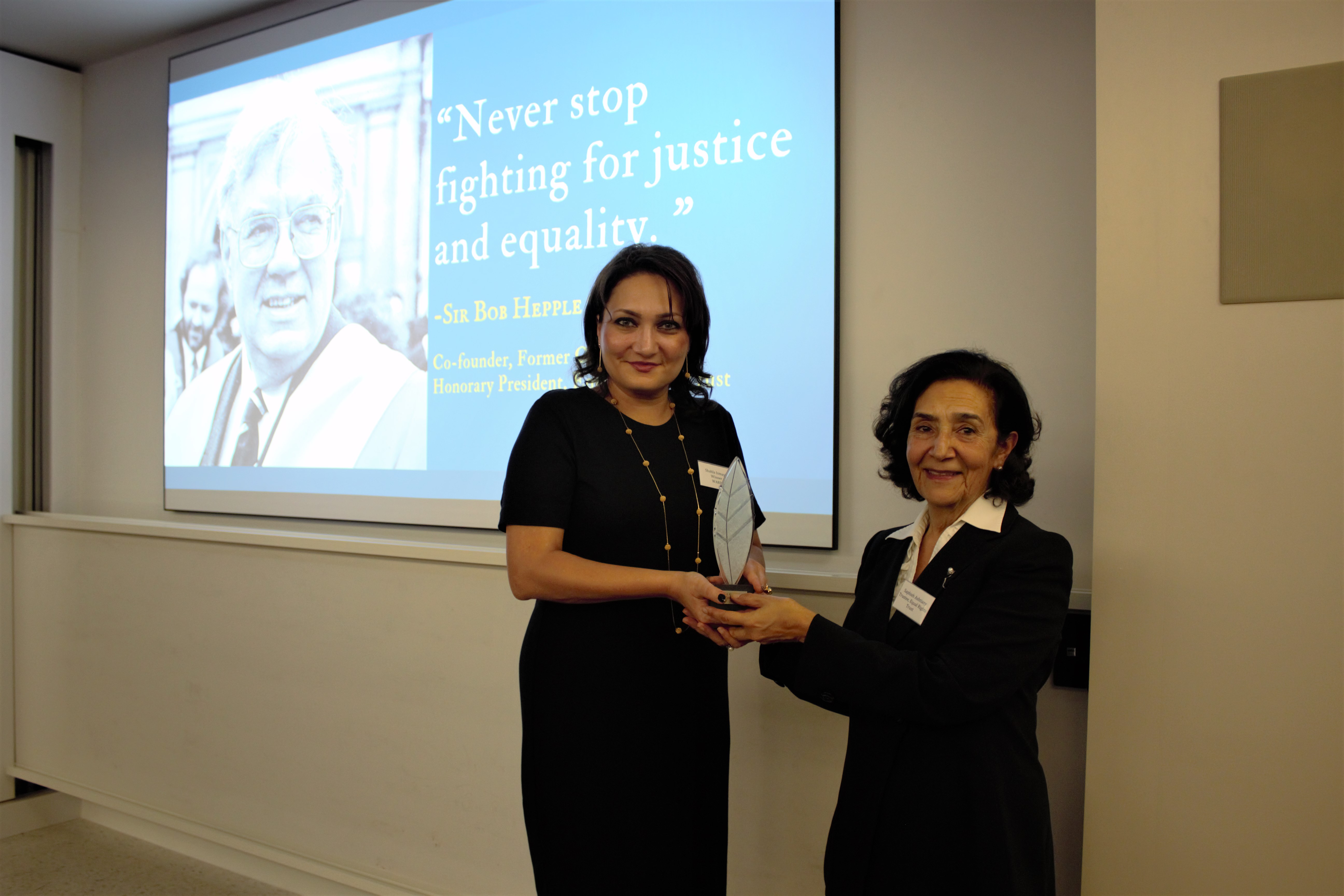 In 2002 Ms. Ismayil co-founded the Women’s Association for Rational Development (WARD); through her work with WARD, she has helped to secure several legal reforms in the field of equality, including notably the adoption of the law on the prevention of domestic violence in 2010.

On accepting the award, Ms. Ismayil spoke about the significant difficulties of NGOs in Azerbaijan. Despite the increasingly challenging environment since 2014, with increased persecution, Ms. Ismayil continues fight for equality through programmes that support women individually and collectively.

She ended her speech on a hopeful note: “I believe Azerbaijan will be the country of my dreams, and I will work tirelessly until that happens.”

We also had the pleasure to hear from Sir Nicholas Blake QC, our keynote speaker of the year. Using the example of jurisprudence on women’s rights and LGBTQ rights in the UK, he explains the importance of litigation in advancing equality. He concluded his speech by emphasising “a fight for equality anywhere is a fight against injustice everywhere”.

Our 2019 winner is Ging Cristobal, co-founder of the Stop the Discrimination Coalition from the Philippines. 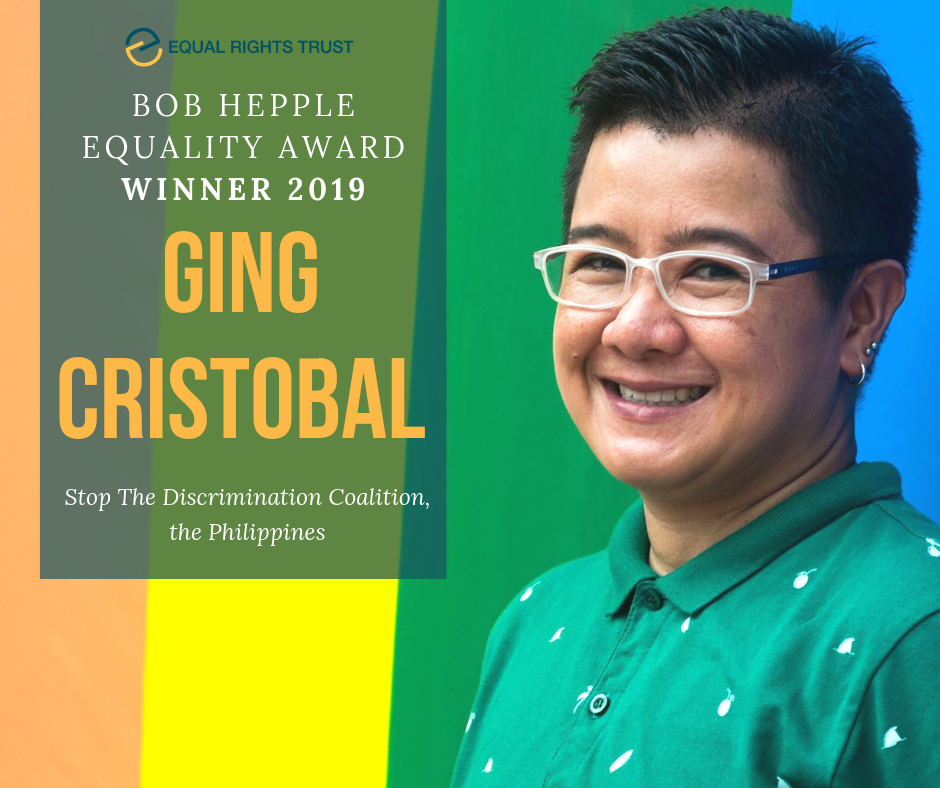 Ging Cristobal is one of the co-founders of the Stop the Discrimination Coalition, a multi-sectoral legislative advocacy network which advocates for the enactment of a comprehensive anti-discrimination law in the Philippines. The Coalition brings together civil society organisations representing groups such as older persons, persons with disabilities and LGBTQI persons, alongside representatives of government and international governmental organisations. Since the Coalition’s establishment in 2015, Ging has been a leading voice in its advocacy for equality law reform in the Philippines. Despite the significant deterioration in the protection of human rights in the Philippines in recent years, Ging and the other members of the Coalition continue to work towards the adoption of a comprehensive equality law.

Alongside her work with the Stop the Discrimination Coalition, Ging has also taken a leading role in building and supporting the LGBTQI+movement in the Philippines and the wider region, for example co-founding ASEAN SOGIE Caucus, a coalition of LGBT groups in Southeast Asia advocating for the inclusion of sexual orientation and gender identity (SOGIE) in the work of the Association of Southeast Asian Nations; and Task Force Pride, a network engaged in organizing the annual LGBT Pride event in the Philippines. Ging is a Project Coordinator for Asia and the Pacific for OutRight Action International. In this role, she is currently working on the inclusion of LGBTQI+ issues into the work of service providers at the community level in two major cities in Manila, supporting them to provide services which are appropriate, respectful and sensitive for LGBTQI+ persons. 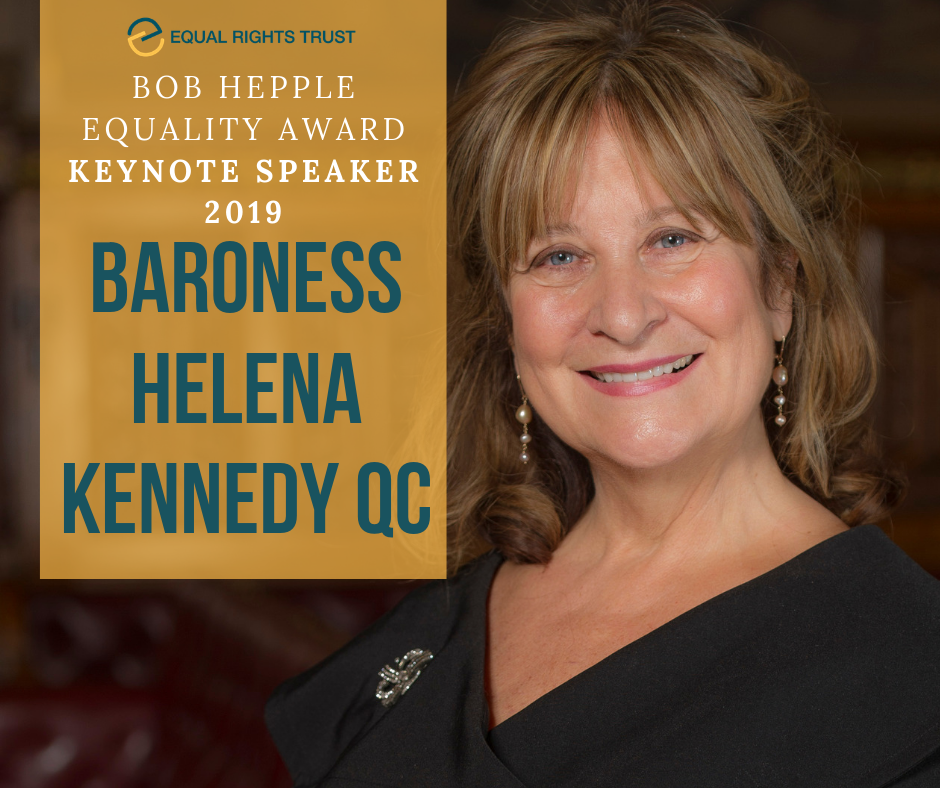 We were also delighted to have Baroness Helena Kennedy QC, one of the most distinguished lawyers in the United Kingdom, as our Keynote Speaker. She has practiced at the Bar for over 40 years in the field of criminal law and has conducted many of the leading cases in those years. She has chaired the British Council and the UK Human Genetics Commission. She has recently been appointed as the new Director of the International Bar Association's Human Rights Institute.